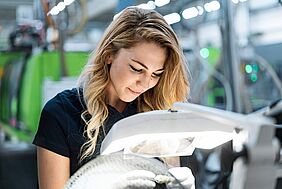 Our processes are subject to the strictest requirements. According to the needs of our customers we produce high quality solutions made of plastic in series. 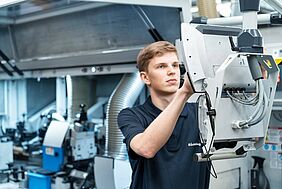 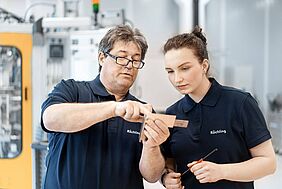 Mannheim, 19 May 2020 | Röchling SE & Co. KG based in Mannheim once again increased sales in its three divisions Industrial, Automotive, and Medical in the 2019 financial year. Despite the dynamics of the global economy slowing down noticeably in the course of the year, the plastics specialist generated an increase of 9.9 percent. Sales thus increased from EUR 2,140.5 million to EUR 2,351.9 million. At the end of last year, the Röchling Group had a total of 11,474 employees, increasing the number of employees by 545 (plus five percent) within the space of one year.

The current financial year is characterized by the outbreak of the coronavirus pandemic, as a result of which many areas of the global economy have collapsed. The medium- and long-term effects of the global shutdown still cannot be foreseen at this time. The Röchling Group was not able to escape this development unscathed in the first quarter of 2020 either, and posted a drop in sales of 8.8 percent as compared to the same quarter of the previous year.

“We recorded sales growth in all divisions in the 2019 financial year. The coronavirus pandemic has been putting both sales and incoming orders in our Industrial and Automotive divisions under pressure since the middle of March. Like many other companies in Germany, we were forced to respond to this situation with short-time work in both divisions as well as short-term plant closures in the Automotive division. By contrast, a number of locations of the Medical division benefited from the increased demand due to the pandemic,” emphasized the CEO of the Röchling Group, Prof. Hanns-Peter Knaebel, at the presentation of the balance sheet figures on Tuesday, 19 May, in a video conference with representatives of the press. He said he was confident that the Röchling Group would emerge from this situation stronger than before. The Röchling Direct Manufacturing Center (RDMC) in Waldachtal-Salzstetten (Baden-Württemberg), which was founded in August 2019 and serves as a center of competence for bundling and further developing the entire expertise of additive manufacturing at Röchling, is to be a building block in this endeavor.

The Röchling Group again placed its focus on research and development last year. In order to accommodate the agile environment of the plastics industry and the company’s own aspiration of innovative strength, a central development department overarching the Industrial division was established in 2019. Strategic development projects that reflect the current key topics of the plastics industry are the priority of this department. These topics include “smart plastics,” “functionalized plastics,” as well as “lightweight construction” and “thermoplastic composites.” However, what are known as bioplastics and CO2-neutral or recycled plastics are also taking on an increasingly important position. In the Automotive division, development encompasses mainly the implementation of customer orders from component development and testing, tool and/or operating equipment design and construction, all the way to efficient production processes. Moreover, research and development also includes the in-house development of plastics applications. In an effort to realize its customers’ ideas and wishes in an accurate, functional, and creative way, the Medical division also has its own internal development department that keeps an eye on the entire value-added chain for customer-specific projects from packaging, transport, and production all the way to dispatch and delivery to the recipient.

Training is also still a very important topic at Röchling. “By training and qualifying young people, we are securing our demand for specialists while taking social responsibility at the same time,” said Knaebel. At the end of last year, the Röchling Group had 358 trainees and apprentices (previous year: 291) – this constitutes an increase of 23 percent. Opportunities range from vocational training in commercial and technical fields to studying at the Duale Hochschule (Cooperative State University).

The Röchling Group is represented at 90 locations in 25 countries worldwide: 57 in Europe, 18 in Asia, and 15 in the Americas. The company acquired plastics processor Schwartz GmbH Technische Kunststoffe (now operating under the name Röchling Industrial Xanten) with effect from 1 January 2019 and strengthened its position as a provider of finished castings made of cast polyamide for heavy-load industry. In contrast, the Automotive division sold its plant in Wolfsburg-Hattorf to the Japanese automotive supplier and component manufacturer Kasai Kogyo in May. “By selling the plant that manufactures door and side panels for automobiles, we are focusing on our core business,” Knaebel emphasized.

In the past year, the Röchling Group generated 37.6 percent of its total sales in Germany, while the rest of Europe contributed 33.6 percent. The share in the Americas was 18.3 percent, with 10.4 percent generated in Asia. The percentages of the shares of the regions in Group sales have therefore not changed significantly as compared to the previous year. Earnings before taxes (EBT) fell by EUR 24 million to EUR 81.9 million. This decline was mainly a result of the challenges in the Automotive division, to which the division responded with the “Driving Future” restructuring program.

The first quarter of 2020 was characterized by the initial impacts of the coronavirus pandemic. Between January and March, the three divisions generated sales of EUR 560.4 million, EUR 54.2 million less than during the same period the previous year. The majority of this drop in sales, EUR 51 million, was recorded by the Automotive division, which suffered from the declining production figures of the automotive manufacturers. Despite the onset of declining sales of EUR 6.6 million as compared to the same quarter in the previous year, the Industrial division increased its profitability and achieved an outstanding performance. The Medical division even achieved growth of EUR 3.2 million. The development of incoming orders in the three divisions was comparable and decreased by 6.3 percent to EUR 581.8 million in the first quarter of 2020 (previous year: EUR 620.7 million). Accordingly, earnings before taxes fell by EUR 12.6 million to EUR 16 million. “Due to current developments, we must implement the cost-cutting measures we have initiated and focus on maintaining the stable cash situation,” emphasized Röchling CFO Evelyn Thome.

The current economic development also affects the number of employees, which had decreased to 11,015 by 31 March 2020. This decline is attributable to the Automotive division and, aside from staffing adjustments in the context of the coronavirus pandemic, is also a result of the “Driving Future” restructuring process.

In the second half of 2019 in particular, the Industrial division was confronted with a considerable weakness in the areas of the semiconductor industry in Asia, wind energy in Europe, and the transformer industry. “This was aggravated by weak demand from European distributors, as they expected prices to drop due to the extremely competitive pressure. In addition, the weak demand from the mechanical engineering sector affected the machining plants,” emphasized Franz Lübbers, the member of the Executive Board of the Röchling Group overseeing the Industrial division.

Nevertheless, the division once again recorded a positive development in the 2019 financial year. Sales rose by 7.3 percent year-on-year to EUR 846.7 million. The share of sales of Röchling Industrial Xanten GmbH, which was acquired at the beginning of January, amounted to EUR 38.1 million for the 2019 financial year. Incoming orders increased to EUR 837.7 million (previous year: EUR 795.3 million) in the reporting year.

The investment activity in the Industrial division was below the previous year’s level. For 2019, the investments in property, plant, and equipment totaled a volume of EUR 39.1 million. Some of these investments went toward production facilities for several locations. Further investments went toward the expansion of the production hall of Röchling Sustaplast SE & Co. KG in Lahnstein and a warehouse in the USA. At the Haren location, the expansion of the site was driven forward and funds were invested in the new Industrial Center.

“We have failed to meet our budgeted figures due to missing series production sales as a result of lower call orders or the postponement of delivery requests on the part of the automotive manufacturers in Europe and North America in particular,” reported Hanns-Peter Knaebel, who has represented the division in the Executive Board since last summer. The sales performance in Asia was still positive overall, although the decline of the Chinese automotive market was noticeable in the sales performance of individual plants.

The “Driving Future” structural program was initiated for the Automotive division in an effort to tackle the transformation process in the automotive market and the current earnings situation accordingly. “The aim of the associated restructuring is to make the company more independent from external influences in terms of its profitability and economic independence and to place an even stronger focus on its own strengths,” said Knaebel. Cost reduction measures were also initiated. This is an important step in order to ensure profitable growth in the years ahead.

The Medical division invested EUR 20.7 million in total in property, plant, and equipment in the 2019 financial year (previous year: EUR 22.9 million). These investments went primarily toward production machines. Investments in the automation of manufacturing were also increased. In addition, plots of land and a building in close proximity to the existing location in Neuhaus am Rennweg (Thuringia) were purchased.

Due to the coronavirus pandemic, the International Monetary Fund (IMF) is expecting a “huge shock” to the global economy accompanied by a decrease of around three percent in the global economic performance (as at: April). The crisis is expected to affect the industrial nations in particular. For Germany, the IMF is even expecting the economic performance to decline by around seven percent. The ifo institute expects the gross domestic product to decrease by 6.2 percent (as at: May). The IMF had expected economic growth of 3.3 percent as recently as January of this year. The IMF is expecting the first catch-up effects at the end of this year at the earliest. Against this backdrop, the Executive Board of the Röchling Group has already adjusted its expectations for the current financial year as compared to the plans: “Assuming the pandemic will continue for some time, we are expecting a noticeable drop in sales and an associated loss of earnings for 2020. Due to the rapid developments and the associated high degree of uncertainty, we are evaluating the financial effects in the form of scenarios for which we have taken the necessary precautions,” said Knaebel.