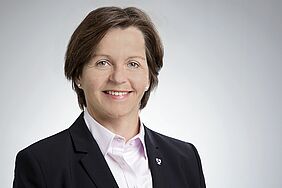 Mannheim, 29 April 2019... Evelyn Thome, previously CFO of the Röchling Automotive Group, is joining the Executive Board of the Mannheim-based plastics specialist Röchling SE & Co. KG. She is succeeding Steffen Rowold in the position of Chief Financial Officer (CFO). Rowold left the company on 1 December 2018, for personal reasons.

“We are very pleased to have been able to fill this important position within our company with a highly capable executive from our own ranks. Evelyn Thome knows our company, our markets, and our challenges very well. As CFO, she will decisively shape the future of the Röchling Group,” said Johannes Freiherr von Salmuth, Chairman of the Advisory Boards of the Röchling Group.

On 13 May 2019, Evelyn Thome’s successor, Raphael Wolfram (37), will take over this function. Wolfram, who has a Master’s degree in finance from the University of St. Gallen, worked for Goldman Sachs in Zurich and London from 2007 to 2012 before moving to the Austrian Greiner Group. The internationally active, family-owned company is one of the world’s largest manufacturers and processors of plastic and foam. Wolfram was initially responsible for the Asia Pacific region. In 2015, he was named Managing Director of Greiner Packaging. In this position, the native Austrian primarily drove market expansion in Turkey and the development of the Middle East and North Africa region.